In case you’ve been offline for the past 24 hours, allow me to get you up to speed on major royal news: Meghan Markle and Prince Harry *finally* sat down for their tell-all interview with Oprah about the trials and tribulations they experienced before stepping back from senior royal duties. To put it plainly, it was a LOT (so much so that we compiled the many interview bombshells right here for your convenience), but there’s one last thing left to analyze—Meghan’s and Harry’s body language.

Anyone tuning in could see that Meghan and Harry presented a united front. Their subtle facial expressions told a much larger story though. Body-language analyst Blanca Cobb took a serious look into Meghan’s and Harry’s nonverbal communication for Cosmopolitan.com and gave insight about the things the royals didn’t say. Read on for the intel!

The hand grasp between Harry and Meghan shows they ground each other.

Several times during the interview, Meghan and Harry kept a firm hand on each other. According to Cobb, this gesture tells us that “Harry and Meghan know that it’s them against the world. With constant criticism splashed in the tabloids and throughout social media, Harry and Meghan are a solid couple. Their handhold throughout the interview was one of support and firmness as if to say, ‘I’ve got you. You’ve got me. We’ve got each other.’” 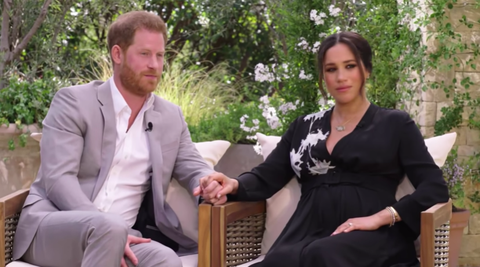 Meghan’s not over Archie’s lack of security and the talk of his skin color during her pregnancy.

In the interview, Meghan revealed there were “racist concerns” regarding Archie’s skin tone, and she shared he also wasn’t going to be given additional security. Cobb says Meghan’s body language shows she is still understandably upset and grappling with these things.

“Moms have an instinctive drive to protect their children at all costs,” Cobb explains. “When answering Oprah’s questions of past conversations about Archie’s skin tone and lack of security, Meghan’s tongue jutted out. This happens when you dislike something, which indicates that Meghan is still struggling emotionally with this.”

Harry feels contempt about the tabloids blaming Meghan for their UK exit.

Sure, this sounds like a given since Meghan is Harry’s wife. But Cobb says Harry’s body language shows that he *especially* disliked it when people made it seem like his decision to leave the royal fam had nothing to do with him.

“Harry made it clear that it was a joint decision to leave the royal family. When he talked about the media blaming Meghan for their departure, Harry’s eyes narrowed and he showed contempt on his face,” Cobb said.

Harry and Meghan paused before answering questions for a reason.

Some viewers wondered if Harry and Meghan were being truthful during the interview because they paused more than a few times before answering questions. But this wasn’t because they were lying! Cobb says it was because they were thinking of the right words to say (you know…without setting off total chaos in the process).

“Harry and Meghan were diplomatic in their answers. They paused before responding to think of the best ways to answer the question. It was apparent that they wanted to tell their truth and also wanted to be cautious about what they said,” Cobb explained. “Additionally, Oprah said before the interview started that neither Harry nor Meghan knew what she would ask, which means that both of them were also put on the spot. This would also help explain any hesitations before answering questions.”

Related Story
Shocking Revelations From the Sussexes’ Interview
Starr BowenbankAssistant News EditorStarr Bowenbank is the assistant news editor who writes about all things pertaining to news, pop culture, and entertainment—you can follow her here.
This content is created and maintained by a third party, and imported onto this page to help users provide their email addresses. You may be able to find more information about this and similar content at piano.io
Advertisement - Continue Reading Below
More FromRoyal News
Surprise! Harry and Meghan Arrive in NYC!
BBC to Pay Royal Nanny "Significant" Damages
Advertisement - Continue Reading Below
‘The Crown’ Season 5’s Cast Looks Perfect
Oprah's Interview w/Harry and Meghan Loses Emmy
The Symbolism in Meghan and Harry's Magazine Cover
54 ‘The Crown’ Characters vs. How They Looked IRL
Will and Kate Are "Anxious" About Harry and Meghan
Are Will and Kate Planning to Have Another Kid?
Prince Harry and Meghan Make TIME's 100 List
Charles Is "Incredibly Sad" About Royal Drama
Royal NewsCelebrity Body Language: DecodedCelebsCelebrities & EntertainmentInside Meghan and Harry's Cute PDA Moment Meghan Markle and Prince Harry's Body LanguageWhat Meghan & Harry's Body Lang With Their BB SaysMeghan & Harry Are Presenting a “United Front” RNMeghan & Harry Are “Disconnecting” From PublicDecoding Will & Harry's ~Vibe~ at Statue Unveiling
SubscribeAbout UsInstagramAdvertise OnlineMedia KitCustomer ServiceWork For CosmoYouTubeOther Hearst SubscriptionsGive Your BFF the MagDigital EditionsNewsletterGiveaways

A Definitive Timeline of Kylie Jenner and Travis Scott&r